Congratulations to "Heroes Among Us" honoree Jeremiah Oakes 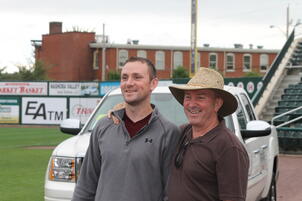 Jeremiah Oakes was honored at the Sunday July 29th Lowell Spinners Game against State College. As the Heroes Among Us honoree, Oakes took batting practice with the team, threw out the first pitch, and ate All You Can Eat BBQ in the Gator Pit and watched the game in the luxurious Yawkey Suite with 10 of his family members and friends.

His citation reads as follows:

Oakes completed three combat tours of duty while serving in the Marines, including one to Afghanistan in 2002 another in 2003 and a deployment to Iraq in 2005.

On June 24 2004 while on a reconnaissance patrol in Kunar Province Oakes lost best friend Justin Thacker when the group was ambushed by the Taliban. Oakes was on a neighboring hilltop when his friend radioed for help.  The small scars on his hands and face illustrate the toll the wars have taken on his young body. He only ever talks about his time overseas when asked and he never boasts about what he's been through.

Oakes grew up in a rural mid-western New Hampshire town and after graduating Newport Middle High School in 2001 had plans to play baseball in college. And then September 11 happened.  While serving as a sniper in Afghanistan in 2002 Oakes over-watched security for the U.S. Embassy in Kabul which included high-profile visitors like then secretary of state Colin Powell and secretary of defense Donald Rumsfeld.

For his service then U.S. Ambassador to Afghanistan Robert Finn awarded Oakes a Certificate of Appreciation for protecting him and other embassy personnel. For his latter two deployments Oakes received two Medals with Combat Valor for heroic actions. But it didn't come without a price. While overseas Oakes estimates that he's lost 15 friends. One thing he prides himself on is that he never lost someone he was in charge of.  After three deployments in four short years Oakes was honorably discharged from the Marines in 2006.