Congratulations to "Heroes Among Us" honoree Sharalis Canales 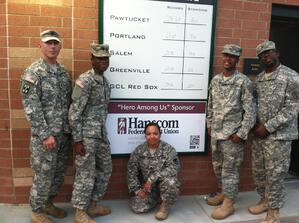 Staff Sgt. Sharalis Canales was honored as a Hero Among Us at the August 27th Lowell Spinners game against the Tri-City Valley Cats. As the Heroes Among Us honoree, Canales took part in batting practice, threw out the first pitch, ate All You Can Eat BBQ in the Gator Pit and watched the game in the luxurious Yawkey Suite with family members and friends.

SSG Canales is an inspiration to her Soldiers. She was given up to the state at 14 and lived in a group home. At 20, she was homeless and decided to join the Army. She is a leader of Soldiers and also a leader in the community by taking her Soldiers to volunteer at the Framingham Salvation Army Soup Kitchen to help feed the homeless. SSG Canales is an inspiration and is a hero.