Hanscom FCU in the News

See community activity highlights: honoring our veterans, Hanscom Heroes Homecoming and a student who is reaching for the stars.

Pitching in to Honor Our Veterans 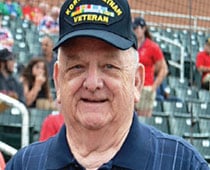 U.S. Army veteran Joseph H. Dussault was our first Hero Among Us of the summer. He was honored July 9 at a Lowell Spinners baseball game. Mr. Dussault, a Lowell resident, served in Korea and Vietnam as a combat medic. For decades, Mr. Dussault has served area veterans as Commander of the Retired Armed Forces, Post Commander of VFW Post 662 and Commander of the Lowell Veterans Council. He also was appointed the Veterans Service Officer to the City of Lowell and served for 15 years in this role. 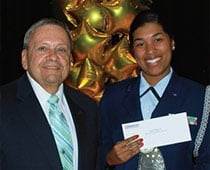 Hanscom FCU officials unveiled a traditional battlefield cross memorial to US Army Major General Harold J. Greene, former Commander of the Natick Soldier Systems Command. Gen. Greene was killed in Afghanistan in 2014. The base of the cross is inscribed “A Soldier’s Soldier Who Truly Served His Nation with Honor.” 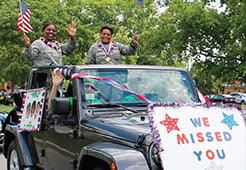 Hanscom FCU was part of this summer’s Hanscom Heroes Homecoming at Hanscom AFB. Over 60 Airmen were welcomed home with a parade, luncheon and award ceremony. The event recognized everyone who returned from a deployment over the past year.

Celebrating Our New Burlington Branch with Donation to Town Group 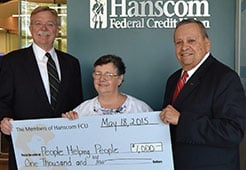 Jo-Ann Gorrasi, board member of People Helping People, accepts a check for $1,000 from Hanscom FCU President/CEO David Sprague and Chairman of the Board Paul Marotta. People Helping People is a Burlington, MA, organization devoted to providing assistance to residents with an emergency need for food, medicine, heat or utilities. The group also provides holiday food baskets and gifts for children through local charitable groups.